This is post 12 of 31 for the Blaugust event. To check out more Blaugust posts and sign up to participate, visit the Blaugust Nook! 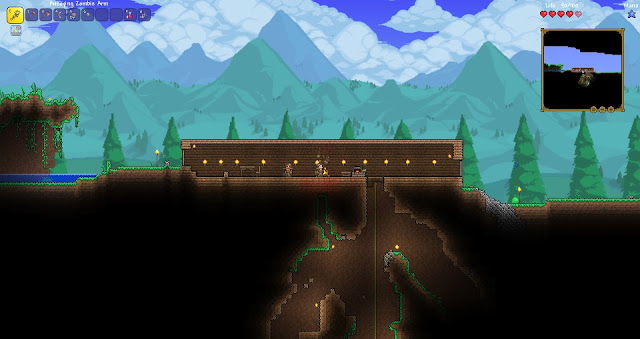 Last night, Chaide and I wanted to game some together, but we wanted something with little pressure, and something where we could only spend a half hour or so without getting dragged into other things. Essentially, we wanted a quick bout of play where we could cut it off without any strings attached.

We settled on Terraria. For those that don’t know, open-world building games are not a forte, nor a favorite, of mine. I’m not fond of the digging and general exploration, and I just don’t enjoy building. I’m never happy with what I build, so I get emo and then just turn it off.

I’m also just not the best at the combat and such in games like this, as it’s a different key-set that I just can’t seem to get used to. And when I play in a larger group of folks in games like this, I feel almost overwhelmed. I don’t feel that I’m a good enough player, or that I contribute enough, or that I’m holding folks back, etc. (Ironically, I rarely get this mindset in typical MMOs…)

Anyway. We booted it up. I’ve had it for a few months. Chaide got a four pack and gave one to me. I played it for about forty-five minutes with Chaide and two other guildies and just didn’t enjoy it (see above).

But last night with Chaide, I had a lot of fun. Yeah, so I asked some stupid questions, and needed to have my hand held (not literally) while I played to get an idea of what to do–but I had fun. One thing I like about the game is that there are achievements through Steam, which make it more fun for me. I enjoyed digging up some ore because I got cute-named achievements.

I also like that there’s pets, mounts, and costumes in the game. So I could see myself picking this up every so often when Chaide and I just need some us-gaming-time without any strings attached.

I can tell you that it felt really good to be able to get some game time in with him for a change, as his schedule and available gaming time has changed a lot since school started. I’m hoping we can pick it up some more in the coming weeks!