On Sunday, I hopped into SWTOR for a good chunk of the day. Chaide and I handed in some quests, and worked on our Bounty Hunter/Imperial Agent combo, and I also spent some time on some alts. 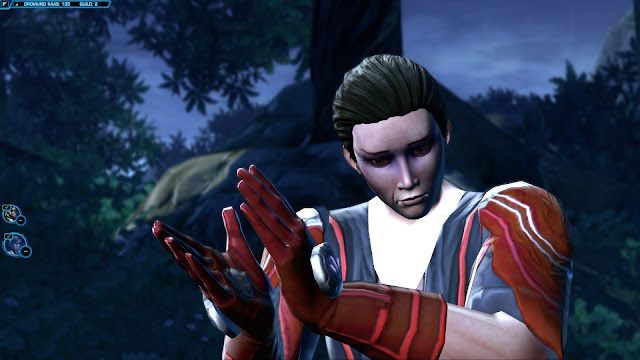 We ended up doing the Sithspawn quest a second time. The whole time we were doing it I kept thinking, “I remember doing this quest recently…”. Well, turns out we had, because the item I chose as the reward was something I was already wearing… could have used the commendations instead! Whoops! 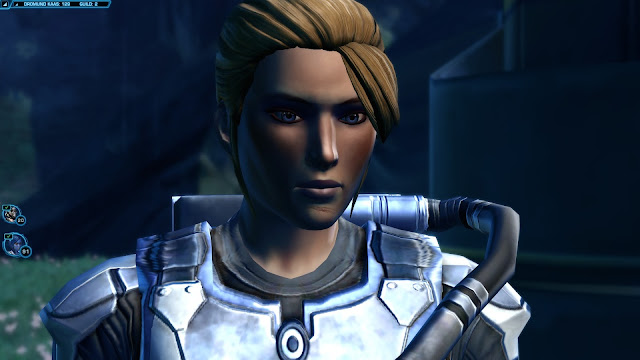 We also did some more quests in the Revanite Camp. I’m really enjoying the story there, and I’m glad that we’re going through all of the quests in the area, despite it taking longer than just taking advantage of the xp bonus going on right now. (Ergo, no level gain, but we had fun!) The downside of that is that we wouldn’t get to actually play together. Which I think is what I dislike the most about the game as a whole. Well, that and the way the F2P system works. Though I am going to go down to Preferred Status at some point soon.

Star Wars is one of those games I enjoy, but it’s not something I want to pursue full time, or make a main game. I enjoy the story in it, which is why I seem to play most of my games nowadays. I’m not big on flashpoints, and I don’t want to raid. I jsut want to hang out and have fun while playing through the story. But, it stinks that it can’t be more multi-player than it is. So, I’m not going to sub to it for much longer, I think.

I did prepare to go down to Preferred status this weekend, though. I had to do some research on the chart, because I don’t feel it’s particularly clear, but I used a good chunk of my Cartel Coins to get a bunch of things, including my Togruta! But, that wasn’t something I was prepping for removing my sub. That’s something I’ve wanted for a long while. (I have a thing for Lekku and Montrals.)

I purchased the Preferred Access Bundle because it was on sale and was a good deal for things I thought were important to keeping me enjoying the game when I change. It included Inventory space, Crew Skill unlock, Speeder unlock, Display Titles unlock, Unify Colors unlock, and Display Legacy title unlock. I’m looking into getting the Crew Appearance authorization, and the Hide Head Slot customization, too. I do find it heinously stupid that I need to purchase Guild Bank Access on a Preferred account, though… for 600 Cartel Coins! 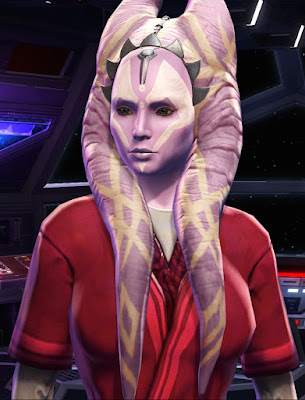 So, since I purchased Togruta, I decided to roll up a new character… again. Yeah, I’m an alt-a-holic, especially in games where I can’t find things to truly occupy my time outside of leveling (or ones that truly don’t interest me in the areas of collecting–I have no desire to compulsively collect achievements in SWTOR as compared to WildStar/TSW/FFXIV).

So, meet Vee’naa, my new Sith Inquisitor! I got her just past the first cutscene, and then switched over to my Bounty Hunter to play her some, as getting her to 20 is on my goals for the month.

I’ve been focusing mainly on the story for my Bounty Hunter, and I think I’ll do the same for my Inquisitor. They might hit max before my main, but I really want to experience everything on my Agent, and don’t feel it benefits me to repeat all of the side quests on the others when I can just gain a level every main-story quest I hand in.

I’ve been having fun playing my Bounty Hunter as a sort of ruffian, and it’ll be neat to play the Sith as a true Sith. I ended up getting the Bounty Hunter to level 12, and I’m hoping to get her some more levels this weekend, because they go by so damned fast.