A Rose Would Smell As Sweet 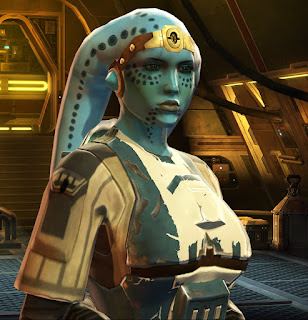 So, to the horror of many Star Trek/Star Wars folks, I have created a new alt in SWTOR, and her name is… Jadz’iaa!

Yup. Jadzia is (one of) my favorite character(s) from Star Trek: Deep Space Nine. When I was a kid watching Star Trek, I really wanted to be Jadzia, and I got a little jealous when so-and-so marries her. Because who wouldn’t want to marry Jadzia?

One of the things I loved (and still love) about Star Trek is that women were human beings–they weren’t put in just for flavor. They were an integral part of the show. They were just as strong as the gents, and they had lives. They weren’t just “kick ass and take names” ladies with no friends, no family, and no love life. I looked up to Jadzia as a female while growing up in the Sci-Fi genre.

So when I spent the Cartel Coins to unlock Twi’lek (yeah yeah) and I saw the spots option, I had to name her Jadzia, even if it is a sin to crossover Trek and Wars like that. Because my Bounty Hunter is a kick-ass lady who will cut you into Sunday. But she also has a soft side. She see Mako as her adopted little sister. She might one day be interested in the romance options available to her (Maybe. Glancing at the list of companions didn’t thrill me.). And yes, to a degree, she has a bit of my own personality. But she’s modeled after the character traits I saw in Jadzia growing up.

So I started a bit of the Bounty Hunter quest line. I do have to say: I really don’t like Hutta. I really hope that the other two classes don’t have to start on Hutta. Ugh. Hutta. 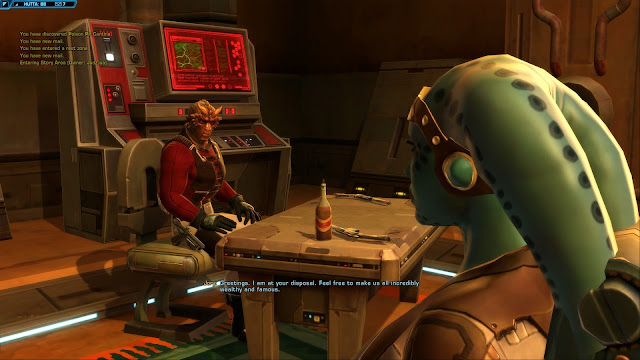 But I really liked Jory. I thought he was neat. He didn’t get sarcasm. It was kind of cute. 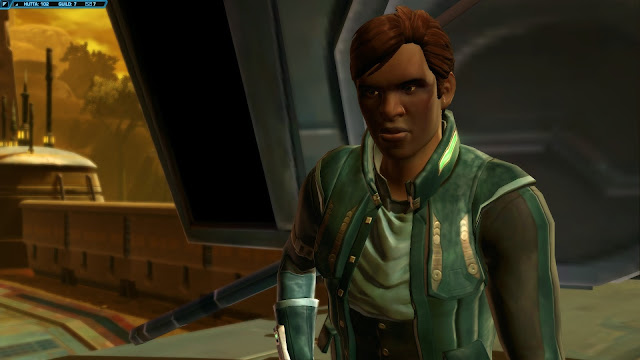 Then it was off to kill a smuggler so I could get into some sort of Bounty Hunter contest. To do so I needed more of a name for myself, so off he had to go. 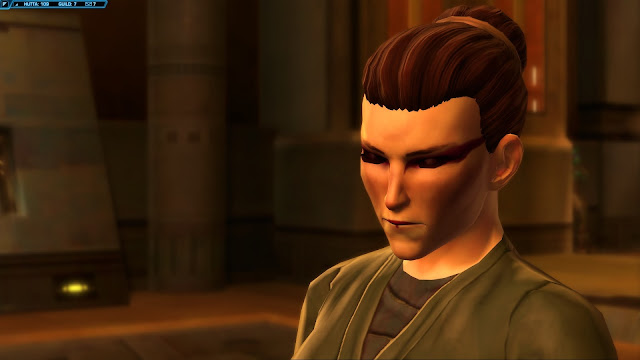 I also helped out some lady, and sided with her husband, that, yeah, she was a little out there. So I sent him off with his son, instead of killing the husband and sending the son off by himself. 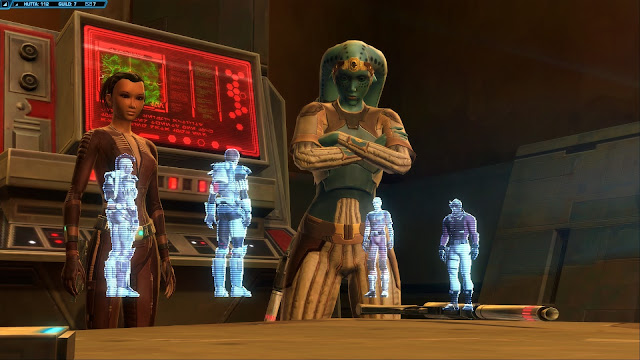 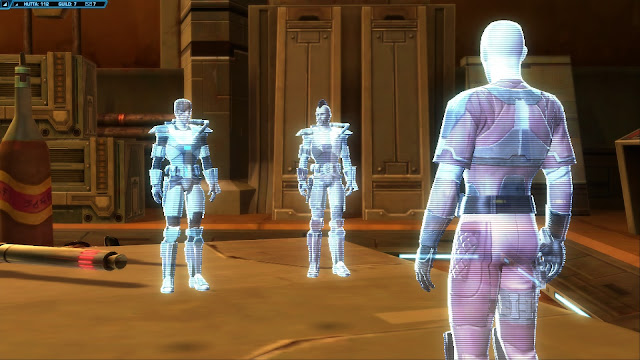 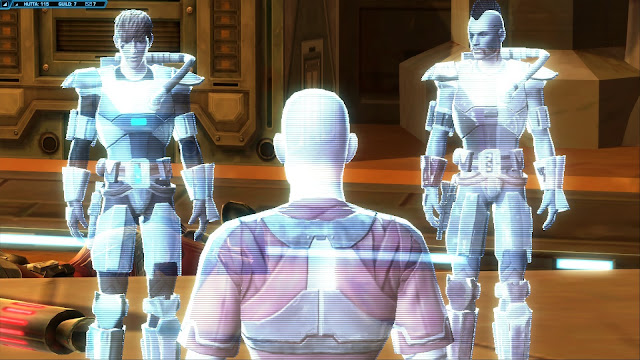 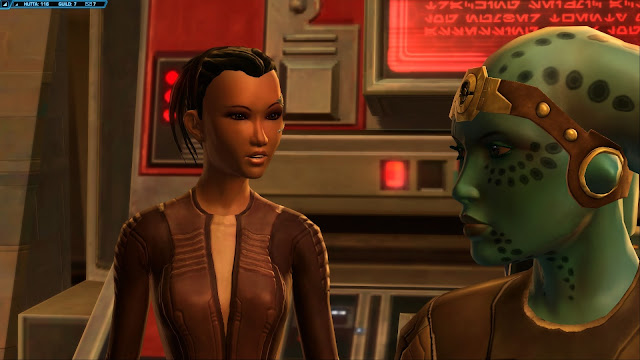 When I got back to the base of operations, I found Jory and Braden dead. Mako and I reviewed the tapes and decided I should follow-through with the plan. 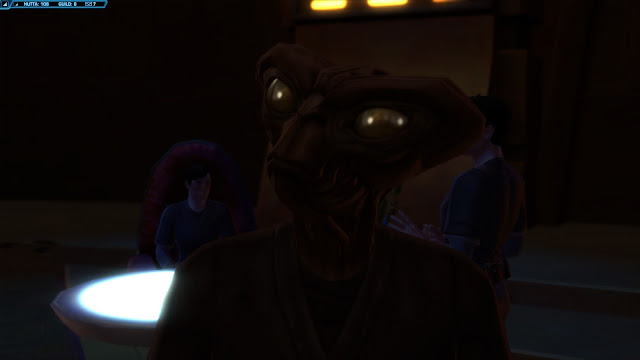 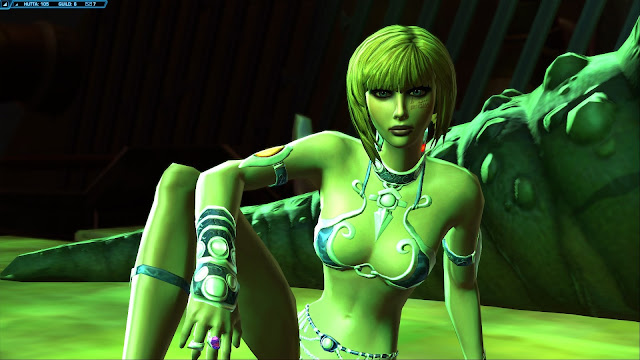 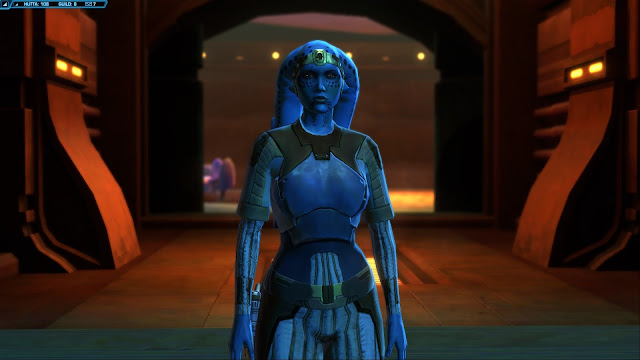 So off I went to go visit Nem’ro, who is going to sponsor me, so long as I go kill somebody. So the conversation went awry and I ended up having to kill him even though it wasn’t my intention. Ah well. Nem’ro will get his head, and I’ll be well on my way into the contest.

Honestly, I really just want off of Hutta so I can go pick up my professions and start working on those. Because I’m really liking how I can AFK-farm. It feels a little cheap, but it’s a nice short break every so often while working to be able to queue up some more gathering.