The long weekend was pretty nice. I have found that when I have more time to spend with Chaide, the less likely I am to take the time to blog. Which is great, because I love spending time with him, but I don’t take the time to do something else I love, and won’t take all that much time away from hanging out with him. Ah, the dilemma.

Anyway, this weekend I decided that I really needed to join a gym. Working out at home has turned into not working out at home. And my back is paying for it. To the point where I was considering seeing a chiropractor (which freaks me the hell out for various reasons we shall not get into). So I did some research of gyms in the area, and found one that’s 24 hours, just opened a new branch in the area, and will have classes soon. So we tried it out.

And I found that I really liked going to the gym. I do think it helps that it’s (1) a smaller gym with front-desk folks that already know our names after two visits, and (2) one of the front-desk folks has been a personal trainer and musculoskeletal therapist for thirty years, so he’s been teaching me exercises and stretches.

Two days after working with him (for free, mind) my back feels a million times better. So much better, in fact, that I feel like my walking posture is different. So yeah, my back was pretty tight… I didn’t go last night, as I had to go back to get my hair undercolor re-dyed (we Gingers do not take well to dying, so she had to up the volumizer… again.) but I plan on going tonight when Chaide gets off work. It also helps having a gym buddy to keep me accountable. Even if I don’t go every day. I’m really blessed to have a husband that supports me trying to better myself like he does. Like, really really lucky.

Monday, Chaide purchased a used DSi for me from one of his friends from his courses at school. I have the original DS in all its bulky glory, but I’ve been using it mainly to play the few GBA games I still own (mainly Monster Rancher, though I have a copy of Pokemon Emerald I have yet to play). So now on top of the four DS games I currently own (Brain Age, Professor Layton and the Curious Village, Rhapsody (which is totally a blast from the past type thing, because I played that on a friend’s Playstation!), and Phoenix Wright Ace Attorney: Justice For All), I have four new ones (Animal Crossing: Wild World, Animal Doctor, Super ScribbleNauts, and Nintendogs: Lab & Friends)!

Granted, I may trade in some of the ones I got to get something else, but I have more games to play. In which case, I may have a DS small enough to fit into my purse and be carried around for lunch break purposes (did I mention the original is kind of unwieldy?). Though I may alternate between reading one day and gaming the next.

Anybody have a DSi? Any games you’d recommend that would play well on it? In fact, what Game Boy Advance games would you suggest? I’m bummed I sold my Game Boy Color way back when, but at least I can download an emulator…

We’ve been catching up on Doctor Who, as well. We had finished Season 7 and were kind of like, “Meh”. Smith took forever to grown on us, and the season just felt lackluster compared to prior seasons (though we like Clara a tad bit better than Amy, but Rory is still the best Companion in the 11th reign). We hadn’t watched any Doctor Who since watching the last of Season 7 months ago, as we don’t have cable.

So over the past few days we watched the 50th Anniversary episode, the final Matt Smith Christmas episode and the first episode of Season 8. For the record, we haven’t seen any spoilers on any of this, so it’s all new to us. How did we avoid spoilers, you ask? Well, for one, our friends who watch are also (mostly) the binge-watch types, or we don’t see them often enough to hear about it weekly. Secondly, we just kind of avoided social media for the big episodes.

The 50th Anniversary was amazing. I thought it was very well written, and tied up a lot of questions I had, and even some I didn’t. I loved the cameo, as well. The Christmas episode, however, was terrible. What the heck was I even watching? I just… it started off with so much promise! And then POOF! It was terrible. The only bit I did like from the episode was when they confirmed that the tenth doctor technically regenerated twice. It gave me great pleasure to hear that because I’ve been arguing that with some friends IRL for ages, and they’ve been poo-pooing me.

As I’ve only seen one episode with Capaldi doctor, I’m not too sure how I’ll like him. So far, I think he’s a good cast, and I’m looking forward to the second episode of Season 8 because it’s a space episode, and we haven’t had one of those good space-horror episodes since Donna, really.

On the gaming front… well… we picked up SWTOR. Yep. And I really tried to play it F2P. I did. I truly did. And… it sucked. It sucked so bad. So, we subbed. However, even being a sub account, I feel  completely nickled-and-dimed on everything but the story. So whether I will stay subbed or not, we shall see. I will at least do so to level to max level.

I’m playing an Imperial Agent (Marksman), and I’m enjoying her. I did have fun with the story, and completed the first flashpoint. I do remember some of the things we did when we first played in beta/release, and they have made changes to make it a tad easier. There are things, however, I’ve found in WildStar and FFXIV that I miss not having in TOR. But I think that’s kind of run of the mill when you play multiple MMOs.

I was also extremely upset to find out that same-sex-romancing hadn’t yet been implemented (that I could find), because I can totally see my character’s personality (or how I play her) jiving with Kaliyo. However, a WildStar guildie did say they think it comes into play later on in the game (possibly the expansion) so we shall see. I was also a bit miffed with all the Light Points I kept getting with my choices, when I completely didn’t see them as being a Light Side choice. It feels like you either kill something to get Dark Points or do something manipulative (and possibly darker intentions than killing someone) to get Light Points. What if I’m just being strategic because I’m a damned Agent?!

Like, in my story arc, you could flirt with someone or kill them, so I decided to flirt with them to make them go away. But I got Light side points. Uh, what? Manipulating someone like that is just as dirty as killing them. And then saving the Cyborg in the flashpoint to interrogate him seems much more evil and sinister than killing him outright. In fact, killing him seems merciful in the situation. So, really, BioWare, what the hell constitutes a light or dark situation in your algorithm?

Annoyances aside, I do think I’ll enjoy the story, and there will be a bunch more screenshots on the blog. In fact, here’s a bunch! (Also, is it possible to hide the UI during cut-scenes?) 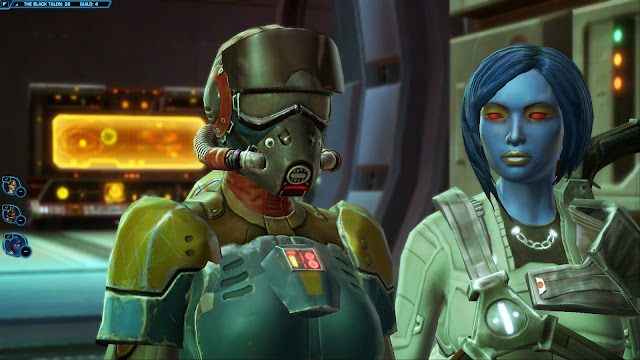 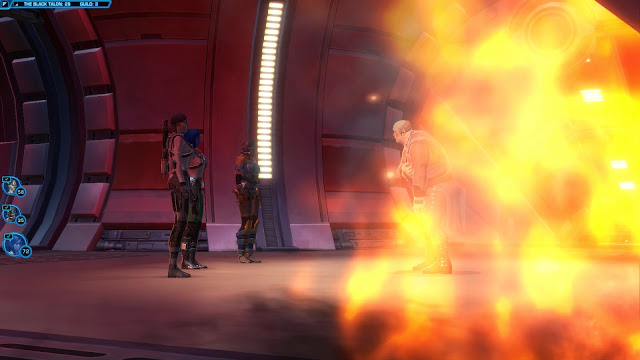 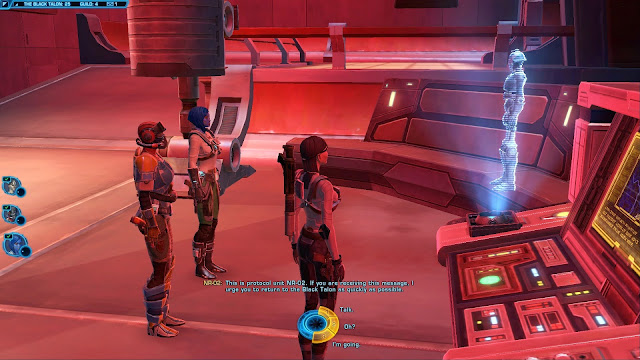 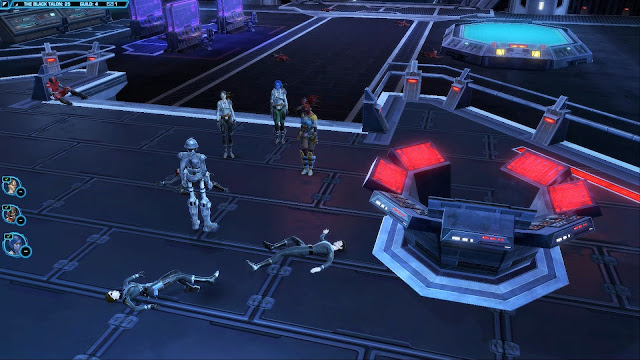 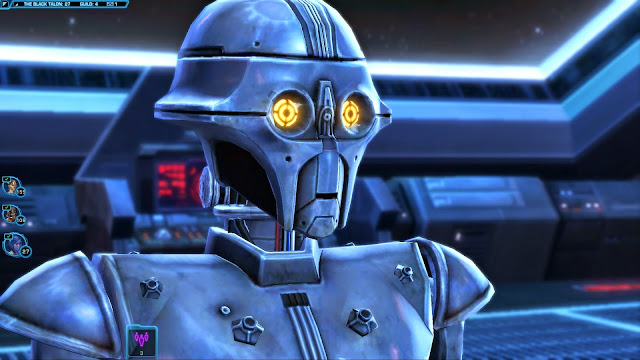 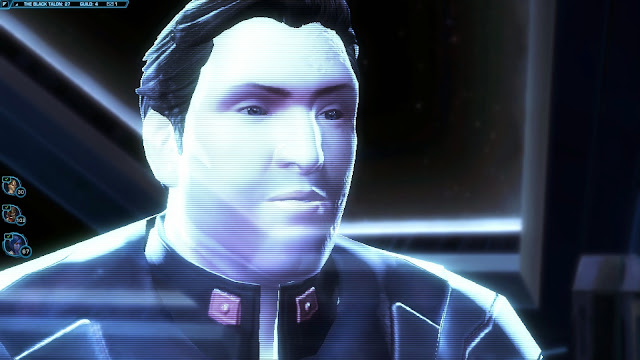